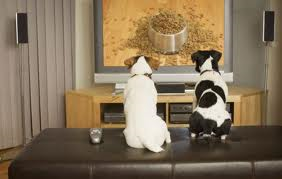 It’s hard having a new dog  because it takes so much time and money to train him/her. Wouldn’t it be great if they could model a behavior they watched on television? A monitor would see if this behavior was achieved and then send a reward for their good behavior. Not only would you have a smarter dog but also a dog that actually did something when you were away. The boob tube in this case would become the smart-tube until “Rover” learns where the remote control is kept.  What’s your opinion? I’d love to know!!