My Oscar picks and why?

My Oscar picks and why? 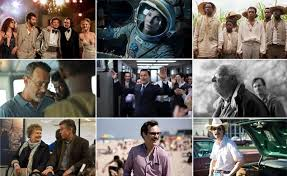 SHOULD BE -American Hustle – This movie has it all great script, acting, cinematography, music score and most importantly is truly entertaining.

WILL BE –  12 Years A Slave- The film deserves to be nominated but there are scenes that  should have been eliminated because they don’t move the story and also some scenes that are bit too gratuitous with violence.  It will win because there hasn’t been a film that dealt with slavery is such a poignant way before.

I’M OKAY WITH- “Wolf of Wall Street” winning as well. It’s a great film and deserves the nomination.

I’M NOT OKAY WITH- ANY OF THE OTHER PICKS WINNING

2) BEST DIRECTOR – The same as above

SHOULD BE — Christian Bale- Here is an actor that brings such depth to this character that he truly becomes alive before your eyes.

SHOULD BE-“Amy Adams” in American Hustle, her work was so extraordinary it must be seen to be believed.

WILL BE – “Amy Adams” unless she forgot to go to the “right parties”.

DISAPPOINTED- If any others win.

SHOULD BE – Jonah Hill in  “Wolf of Wall Street”.  Mr. Hill’s performance enabled the viewer to become glued with his character on the screen.

WILL BE- ” Michael Fassbender” in “12 Years A Slave” especially if this film doesn’t win best movie of the year.

DISAPPOINTED  If”Barkhad Abdi” wins. I can’t understand why this movie is even nominated.

SHOULD BE- “Jennifer Lawrence” in “American Hustle”.  I couldn’t believe this was the same Jennifer Lawrence that starred in the Hungry Games. Wow what a transformation!

WILL BE-  “Jennifer Lawrence” in “American Hustle”

SHOULD BE- “American Hustle”  What a great story that flowed every moment on the screen.

WILL BE – “American Hustle”

SHOULD BE- “12 Years A Slave”. This script was powerful and poignant enough to touch every viewers heart.

I’M FINE WITH – “The Wolf of Wall Street”. Although I felt it didn’t showcase the fall that was described in more depth with the book.

DISCLAIMER- I didn’t get to see “Nebraska”, “Philomena” and  “Nebraska”

Charity with a push