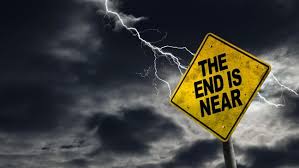 If the world doesn’t end on September 23rd as Christian Numerolgist David Meade has predicted I and my fellow Jews would like to get some credit and trust me we will be earning it. For in the next few days we will be asking G-D to forgive our sins and those of others so we can have another year of health, happiness and in David Meade’s case survival. We will be spending hours upon hours in our local Shuls/Synagogues praying for such forgiveness and a new year of peace, wisdom and prosperity.   When millions upon millions of people are praying together well I’m sure it could change any plans G-D might have had for the day and hopefully the year.   Where many of those that aren’t friends of our faith appear to blame “the jews” for everything you hopefully say they helped saved the world.  If David Meade is correct then they’ll be nothing (literally) to talk about but if he’s incorrect (G-D willing) well a thank you would be nice.

FOOTNOTE- I’m sure it couldn’t hurt if others from different faiths decided to add to the faith train whether such a date has an relevancy to the truth or not you’ll know the one worth hearing is listening.

David Mead’s Prediction Based on