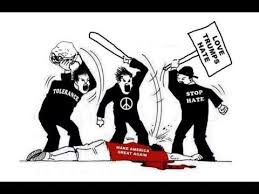 The left is a religion where the ends justify the means even  if they really never occur.  It is a religion that believes in the ultimate paradise of sunshine even as everyone else see’s darker and darker clouds ahead. Those that practice such a religion never look at what is actually occurring on the ground but what is in their heart so they can stop the beat of another. The left are not liberals who will actually look to the whole picture to determine policy (even if it’s still wrong) because the left only look to other distant planets. Venezuela’s is a perfect example where  people are starving to death due to this form of tyrannical  philosophy but that is only the bodies (literally) that must be taken to get to their paradise. A paradise let’s hope we all learn is not worth traveling to.

If a blog piece