Posted by Bruce - in Blog, breaking news, Political - No Comments 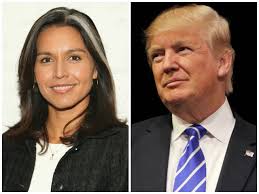 In a move that has shocked the political landscape Donald Trump has picked Tulsi Gabbard as Secretary of State. The Democratic Congresswoman who originally supported Bernie Sanders for President was picked to show that the President Elect is truly trying to unite the entire country.   This move has sent shock waves through the Democratic party that has tried to de- legitimize the President Elect’s standing and is sure to send shock waves throughout the entire political establishment.  ….. Hey it’s nice to dream.