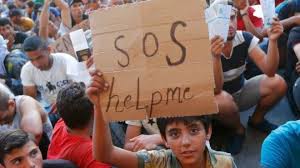 When you put your head in the sand (as many European leaders & U.S leaders have done) the sand gets kicked in your face. Instead of taking an active stand and supporting “Freedom Fighters”( in the beginning) who were trying to overthrow an evil regime in Syria Europe and the world ignored their plight and now the migrants have come to roost.
The scary thing about this migrant problem is we truly don’t know who is coming and therefore in between most honest hard working people might be many an ISIS terrorist. Therefore a system needs to be set up.

(1) Well regulated and stocked refugee camps need to be set so that those who are good people can move to friendly countries in an orderly basis. While those who have troubling records can be set back.

(2) Refugee Camps should also be places where the strong are taught how to defend their country and understand/ respect basic human freedoms that are given by G-D. Those who are trained should be sent back equipped to defend their homeland.

(3) Those that have terrorist links should be interrogated to provide additional information that can be used on the battlefield and if possible be trained as double agents to continually provide this information.