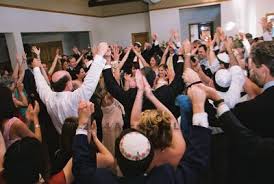 When most people think of  “mixed marriage” they see people of two different faith’s coming together to tie the knot but that also can occur with those of different sects of the same faith.  For those who are more traditional Jewish usually want separate seating for the service, want the service to be mostly in Hebrew and the dancing to be separate between men and woman, while those who are less traditional generally want the opposite.  Therefore one might conclude that when the union of these two souls combine that the souls of their families will only be in conflict but what I witnessed today showed that milk and chocolate really do make a great combination . The beauty of the traditional and less traditional combined in such a beautiful way that it appeared as natural as a fresh brook.  The love between the couple and their families out shined any differences that might have occurred and those that attended saw only a loving couple that added something wonderful and unique to this special day.