Trying to keep an open mine when the door keeps shutting.

Trying to keep an open mine when the door keeps shutting. 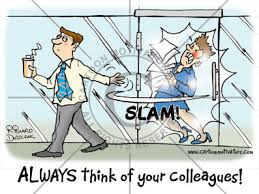 Every time I try to keep an open mine on this administration they keep slamming the door on my face.  You may ask why I should keep this door open am I masochist  (I don’t think so but lately…) it’s because I believe it’s the duty of every citizen to have respect for the office of the Presidency no matter what bum occupies it. Okay I’m sorry about the bum remark but Mr. President please give me and the American people a break.  You can’t just give a good speech from the teleprompter and smile at the camera’s you actually have to have policies that actually work… at least partially.

Now you tell the Prime Minister of Israel to stop assassinating Iran’s nuclear scientist while you practically give Iran the nuclear key. Imagine if the Prime Minister told you it was mean that you were targeting Al Qaida leaders and you should stop it. I’ll make this simple just like Al Qaida wants to destroy the United States Iran has pledged to wipe Israel off the face of the earth. The only difference is Al Qaida has small weapons such as guns to accomplish it’s mission while Iran has missiles and is developing a Nuclear bomb. You might also consider Iran is a bit closer to Israel then a bunch of terrorist from the Middle East to us.

Okay tomorrow’s a new day and just like the sun will rise maybe a brilliant idea will arise in your mind.  I have to believe because we’ve got 695 days till you move to become an NCAA Announcer or become the host of the Oscars.    I still feel the pain from the door this morning but I’m going to keep on believing because I’m an eternal optimist and a masochist.

(ONE PERSONAL NOTE THANKS CM FOR CORRECTING MY S&M)