Worried about who votes

Worried about who votes 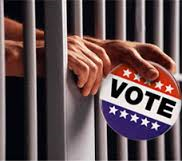 The Attorney General worries about convicted felonies voting while I worry about who votes. I think we should worry about insuring that our public is truly educated on the issues and the candidates then worry about increasing the voter population. How many of us know individuals who truly have no clue who the V.P. or even what v.P. stands for and actual cast a ballot in the voting booth? How many of us know individuals who truly base their vote on how the candidate makes them feel and not on what they plan to do? I believe instead of worrying about convicted felonies rights let’s worry about the current voting populations rights. If we have an ignorant voters we will have a government that hurt us all. Here are just a few solutions.

(1) VOTERS GUIDE- (With coupons) That presents the issues and the candidates stands on those issues in a clear just way. It would be given to all citizens a week before the election for free because there would be corporate sponsors (coupons) and would be submitted with equal input from all the candidates and their parties.

(3) STATEWIDE/NATIONAL OFFICE RACES- Candidates would have to participate in at least two televised debated (not just on CSPAN).

PLEASE ADD YOUR OWN SUGGESTIONS AND COMMENTS

Best Oreo Ever ….or