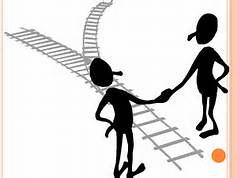 Many people believe to compromise means to give up on basic principles but I see some of the greatest compromises occurring when people hold true to their values. Whether it be the development of the House of Representatives (representing the larger state values) and the Senate (representing the smaller state values) compromise works best when everyone feels they won something. It allows people not only to save face but gives them the incentive to work together to make sure the goal is successful.

Recently at my Shul there was a heated discussion on where monies donated during religious services should go. One side believed that charity begins at home and therefore we should use the funds to take of running the Shul. The other side believed that charity monies should truly go to the least among others. The debate was getting heated when a man of principle suggested let the donor decide. This would occur  by putting up two boxes out one to fund the Shul and the other to go to those who are least among us. The donor would then put his/her money where his mouth is.  Compromise is not a dirty word when people can walk out of the room with their values still upheld.

When are/were you the happiest? The survey says….