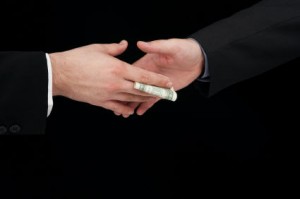 It has come to my attention that the Purchasing Department of a certain City Institution has blacklisted some vendors for no reason. These vendors provided goods and services to this institution for years at much lower prices then they are currently buying these goods for. This means that the taxpayer monies are being thrown away like paper in a fireplace.

Those in the lower levels of authority at this institution are disgusted and suggested that I make a complaint.  Yet when I went to call 311 to report this abuse they had know one I could report it to. I then spent about a half an hour trying to speak to someone from the State Attorney General office who directed me to the City Attorney General Office where I spent another c. 1/2 hour on the phone.  Where do I go now? Luckily I have a friend who has the ability to spend some time investigating which investigating agencies I should go to otherwise I probably wouldn’t have the time to pursue the truth.

This is just another example of why big government is not the answer.  Although most of the workers at these institutions are fine outstanding members of our community it only takes a few corrupt individuals at the top to destroy all their good works. What makes it most enticing for these individuals to act in such a corrupt way is that there is no oversight and no need for being under budget like in the private sector where spending too much for a product can put you out of business.