Senator Schumer is not king Schumer

Senator Schumer is not king Schumer 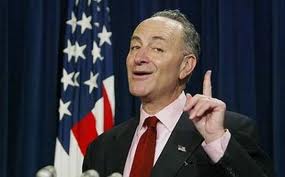 No you’re not #1 the people of NY deserve better.

We are told that Senator Schumer is a shoe in and that nobody can truly challenge him for his Senate seat. This disgusts me because the Senator works for the people of NY and yet the policies he votes for are against most of those NY’s.  I’m also disgusted because no representative should feel like there seat is guaranteed just because they have the resources of the political elite! We the people should insure that we put up a candidate who will fight to earn that seat. I would be honored to fight for that seat if there was a path and support for me to do so.  Here are just a few examples of why Senator Schumer should be seeking a different career path.

(1) Senator Schumer has continually voted for increasing taxes on all New Yorkers. Rich, Middle and even poor.

(2) The Senator has voted to over-regulate and in-turn destroy business opportunities in the state.

(3) Schumer has voted for restrictions on bank and financial institutions that only help the big institutions and hurt community and local banks. These are the banks that support small businesses and start-ups.

(4) Senator Schumer voted in favor of Defense Secretary Chuck Hagel who has made anti-Semitic and anti-Israel remarks throughout his career.

(5) The Senator has shown disrespect and contempt for his employer the people of NY, especially those who see things differently. We expect our Senator to take a strong stand on issues that other NY’s might disagree with but we also expect him/her to respectful and listen to those from the state with differing points of view.

I can go on and on and on but I’ve got to go to work to pay for the Obamacare mess he voted for.

Is this the new – ONE DIRECTION

10 Comments to “ Senator Schumer is not king Schumer”