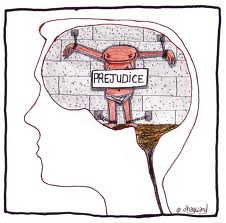 Political Prejudice labels everyone in a group and expects them all to act a like.  I understand that individuals from certain political parties generally have certain positions that we as individuals approve of or disapprove of but let’s hear it from the their mouth and/or papers before we throw that position on them. When it comes to voting for individuals for office we might be more inclined to vote for a certain party because we identify with their values those parties espouse yet we should try to look a bit deeper and see if the individual shares those values or is just holding the label.

More importantly lets not judge our fellow citizens because they identify with a certain political party until we hear what that party identification means to them. For  example many of my friends who are conservatives and liberal shock me by the contrarian  positions they have from their own party platform. We even expect every conservative and liberals to live a certain “lifestyle” and are often shocked to see that they actually live their life contrary to the stereotype.  It’s time we look at people as individuals and judge them as such.