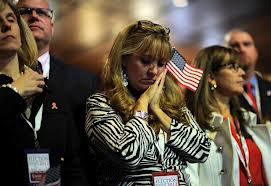 When your candidate loses an election in a battle for a political office or even on a show like “America’s Got Talent” it can be quite depressing.  Although having your candidate losing a political battle can have a greater impact on your daily life both situations make you feel like you “what the hell were they thinking”?  You wonder even for a moment whether “Democracy really works”? I believe it still does (see below)

(1) PERCEPTION- The people will more likely accept the reality of their life’s when they have a say in how it’s decided.

(2) SELF FULFILLING PROPHECY- The majority will work to see that there candidate is more successful then their policies would lead us to believe.

Please note for this to occur the Fifth Estate/ The Press must do a better job in reporting the whole truth (not a biased truth) and the opposition must have a charismatic leader with  clear vision of their goals and how they will achieve them.