How American’s can trust each other, again

How American’s can trust each other, again 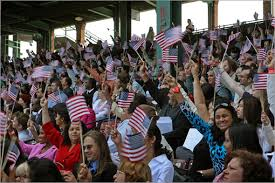 In a recent poll it was suggested that more Americans then ever don’t trust their fellow citizens in making the correct political decision. This is extremely dangerous in a Democracy which entire basis for existence is to serve these people. The key to regaining that trust is to  insure that the citizens are well informed and that they are listened to whether their party wins or loses an election.  Here are some key steps (below) that should be enacted to regain that trust. Your comments are greatly appreciated.

(2)Panels for citizens- Enabling citizens to be on more advisory boards to suggest policy changes to enact. These panels will be selected only based on skills needed and not be “political appointments” (based on lottery type system)

(3) Civics Training for all students – Where students will participate in local political and/or community projects in their area to receive credits.

(4) Politicians listening to all- We don’t want political leaders that won’t hold on to their convictions, but they should be able to debate and discuss these convictions especially with those they serve with different opinions.  Therefore political officials must actively seek regular meetings (mandatory if necessary) with citizens and private political groups that have differing views. Who knows maybe they’ll learn something

(5) Tax credit for those (TV networks, Radio Shows, Newspapers, schools)  that find ways to educate the public on the constitutional,  political views and political principles from various political points of view. These institution must use key players from those political prospectives to get there tax credit

(6) More debates between those who seek public officials in front of different types of audiences (mandatory if necessary).

Films that were SHOCKINGLY ….. BAD