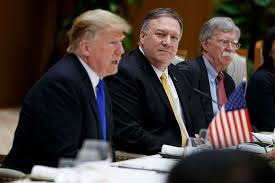 Many might say that the President sometimes bends the truth but when he claims that h his former National Security Adviser John Bolton strongly disagreed with him even those critics must  admit that he is honest as Abe.  For not only did they have strong disagreements on policy that was open to the public  but they also strongly disagreed  on whether Mr. Bolton was fired or quit.  One says fired the other says quit.  All we can say is The Odd Couple season Washington D.C is over