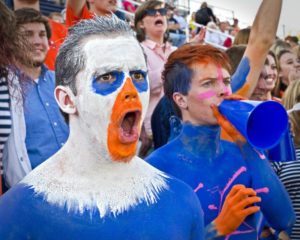 I was paid to watch and wear their colors by people like the one above and then by one’s who put this practice out of business for good.  For once I cheered for a team they suddenly had the power to come from any deficit even if it was the top of the 9th or with 2 minutes left in the game. It was exciting at 1st but then it became a business and like all businesses sometimes a bit mundane. Yet once that power was leaked out I became beholden to those who were the greatest supporters with $$ or those that had the most too win or lose with such an outcome. Which led to my demise when I fell asleep before the end of the game and those who invested in me decided to put an end to this game for good. The clock ticked but this time I had no effect on the outcome because I couldn’t watch for good anymore.

FOOTNOTE- I’m pretty confident I don’t have this power although this story was inspired by the come back from behind win of the Met’s over the Yankees in the 9th inning last night once my T.V. and mind was set to the game.

2nd FOOTNOTE: Found out the game was cancelled do to rain and I was just watching a game from a year ago instead. Oh well another power lost.

War between literally and figurative