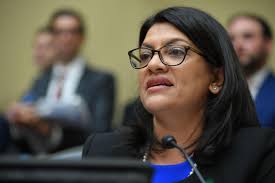 Congresswoman Tlaib doesn’t say the words directly but instead weaves an evil thread. She leads those who want hate of the Jewish State to follow her by giving her meat along the way. Yes, we know that when she feels “comfort in the holocaust” that it leads to another statement which makes it appear less noxious. Yet to act as if the Palestinian people gave up their land as some charity cause to those survivors of the holocaust is a fiction that would make an Anti- Semite proud. As she portrays the Palestinian people as victims of their good will instead of incompetent evil leadership that has lead them down this path which hurts them and all peace loving people.  It is creative use to those haters to give them some type of “logic” for their despicable feelings although they are  based on lies. Furthermore why bring up comfort and the holocaust together if it wasn’t meant to deceive so that the later statement wouldn’t be as toxic.  Tlaib might be one of the most dangerous individuals in the Congress because she never says it directly and knows how far she can push the buttons without revealing the hate which is pounding beneath.