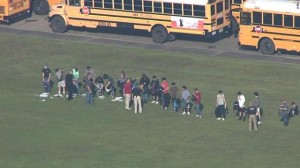 Today another school shooting occurred this time in Sante Fe  which makes us wonder are there any ways to stop this evil attacks in the future. Here (below) are ways that 99.9 % of mass shooting could be eliminated and then more realistic ways we can greatly reduce the suffering tomorrow.

BAN GUNS-  It’s obvious if there were no guns then there could be no shootings there might be mass stabbings and bombings but without any guns then this equipment would not be used. Of course banning all guns would be unconstitutional, eliminate the ability of households to defend themselves and probably cause a civil war which would have more casualities so when pigs fly this solution would be adopted.

ALL CITIZENS CARRY GUNS- If all citizens could carry guns then if someone decided to use this equipment in an evil way they would be eliminated from the scene immediately. Of course this would take another flight of pigs to occur with many anti-gun advocates not only wanting nothing to do with such equipment but wanting others denied this right as well.

ARMED TRAINED SHARPSHOOTERS ON HIGHER GROUND W OTHER SECURITY FORCES ON THE GROUND-  When a number of facilities including schools adopt this procedure we can eliminate the enemy quickly before mass killings occur. These security individuals would oversee a large perimeter around the buildings and make sure it’s secure.  We can draw on individuals who served in the military, retired police officers and trained citizens to fulfil these roles. Even large facilities that don’t officially adopt such policies on a daily basis can have spot checks by security officials on an irregular basis. This would stop most who would committ such evil because they never know what day they could perpetrate it. Many anti-gun advocates might be against this move but this is still the most realistic program going forward.

My Story- Part I- Bud In Joseph’s Sandals- Section 5