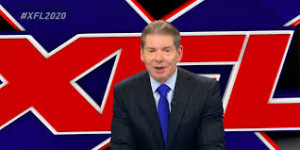 I’m so excited that Vince McMahon has decided to return the XFL to the American people in 2020 and it appears he will incorporate some of the basic ideas of Freedom Football (below) to this important league. A league that will be geared as he says to those that watch the sport not to political or social controversies. This is something I would love to be involved and since there are 2 years till the first kickoff who knows whether I will also be able to run for a touchdown (metaphor) or just be cheering in the crowd as G-D willing football returns to all the people of this great land.

The FFL Freedom Football League would be a football league that would stand with pride for the Red, White and Blue and play in the heartland of this country.  From Iowa to South Carolina the FFL would serve the rest of the country with a game that is fun for the entire family as well as participate in locate community activities that seek to improve this great country in between the games.

Further note  the game called football has become wussified where it’s more important to be a better actor then kick some butt on the field. There are penalties for roughing the passer and roughing the kicker in a sport that is supposed to be rough.   “Freedom Football” lightens the rules not the roughness of football.  What Ultimate Boxing did for boxing Freedom Football does for football.

A debate worth having.

I dedicate this to “Snowflake”