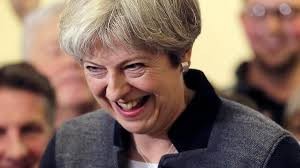 Teresa may wins re-election today or at least I hope she does. For Britain can’t afford to go down the socialist liberal trail especially after the terrorist attacks in their midst. They must have a leader who has been tested when they are in the midst of unprecedented attacks on their soil.  These attacks are not something that can be sustained in England but due to the ease of transportation can be spread throughout the whole world as a Cancer spreads. I believe the Prime Minister has learned that being political correct will not solve the problem and only a strong offense will work instead… at least compared to her socialist opponent.  Let us hope that she is still smiling after tonight’s election results for the good of England and the free world as a whole.