Republican Health Care Law & 1 who could KILL it!

Republican Health Care Law & 1 who could KILL it! 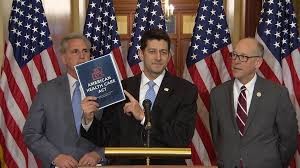 There is one individual who could kill the Republican’s Replacement for Obamacare and he’s not even in office.  A matter of fact it would only take his praise to have this act killed before it gets through any committees.   If former President Obama agrees that this act is a good replacement for “Obamacare” it would go down for the count. Even if the former President says he’d rather see the “Affordable Care” extended but can deal with this replacement there wouldn’t be enough Oxygen to bring this bill back to life.  Of course the former President wouldn’t make this move in chess and I believe “American Health Care Act” has a good chance of passing in the Congress and making us all a bit more healthy and wealthy.