by Bruce / Monday, 15 February 2016 / Published in arts and entertainment, movies 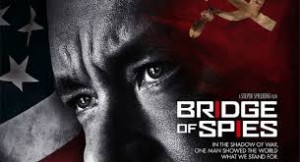 “Bridge Of Spies” is one of those Oscar Nominated Films that receives this accommodations not for it’s artistic achievement but because of it’s political message and the friends it has in Hollywood. Don’t get me wrong “Bridge of Spies” is a fine movie but is it truly exceptionally I beg to differ.  The characters aren’t well drawn out, the action is predictable and the ending is so,so.  The political message of National Security VS constitutional liberty, Tom Hanks, Steven Spielberg is the real reason it’s up in this category.  It is worthy of Oscar nomination for it’s set designs and cinematography.  “Bridge of Spies” is worthy of 2  hours of your time but only if you’ve seen these  Oscar Nominated Films before “Room”, “Brooklyn”and even “The Martian”.