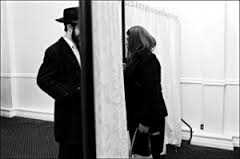 One of the biggest difference between the more traditional Jewish person and the less traditional is the “Mechitza” which separates women from men. Most that are Orthodox will not become a member of a Synagogue that doesn’t have this separation while those who are less traditional will not become a member of a Synagogue that has it.  “Basic Judaism” believes all should be able to pray at one place therefore all sides must get what they need. A Mechitza should be placed for those that are more traditional in one section of the Synagogue while mixed seating in another section. This should be done in such a way that everyone’s view of what is going on can be easily seen. There also must be someone who keeps people informed of the what is occurring for those who are not as custom to the service and might otherwise feel intimated to speak up.  Basic Judaism believes in observing the traditional service at the Synagogue but the flexibility to allow a more concise service which has give an take for those who are on different paths to the truth but keep the basic faith.