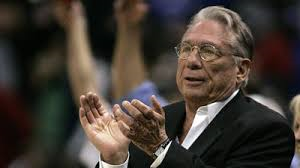 IF YOU’RE LIFE WAS DEPENDED ON DEFENDING DONALD STERLING WHAT EXCUSE WOULD YOU GIVE?

Here’s a few that I believe will be used.

(2) His comments were taken out of context.

(3) He was having a fight with his girlfriend and spoke out of emotion not logic?

(4) His girlfriend gave him drugs that caused his crazed mental state.

(5) That was an impersonator not Donald Sterling?