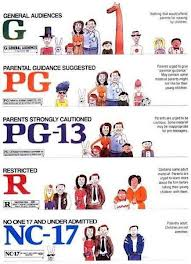 We trust the movie industry to decide on a rating system for films (see below) but we don’t trust other industries to rate or regulate themselves why?

The Motion Picture Association of America

The Motion Picture Association of America, Inc. (MPAA), together with the Motion Picture Association (MPA) and MPAA’s other subsidiaries and affiliates, serves as the voice and advocate of the American motion picture, home video and television industries in the United States and around the world. MPAA’s members are the six major U.S. motion picture studios: Walt Disney Studios Motion Pictures; Paramount Pictures Corporation; Sony Pictures Entertainment Inc.; Twentieth Century Fox Film Corporation; Universal City Studios LLC; and Warner Bros. Entertainment Inc. We are a proud champion of intellectual property rights, free and fair trade, innovative consumer choices, freedom of expression and the enduring power of movies to enrich and enhance people’s lives.
MPAA’s principal U.S. offices are located in Washington, D.C., and Los Angeles, California. We also have content protection teams in Chicago, Dallas and New York. The MPA, and other subsidiaries and affiliates of MPAA, have commercial and regional offices in Brussels, Singapore, Sao Paulo, Mexico City and Toronto. Along with our own subsidiaries and affiliates, we work with many content protection groups and other organizations in more than 30 countries around the world.

Terminator brought to you by Google

4 Comments to “ Who rates movies?”