The Lone Ranger- Is truly a total loss

The Lone Ranger- Is truly a total loss

by Bruce / Wednesday, 03 July 2013 / Published in arts and entertainment, Blog

The Lone Ranger is a movie that doesn’t know whether it’s a comedy, action movie, or drama so it decides to become a piece of crap. Not only was the script unbearable but the acting was at that same level.  This film hit all the predictable Hollywood themes such as white people bad, rich people worse and of course the newest anti-gun themes.  This was one of the first movies in years that I had to walk out on because I felt my brain would explode if I stayed a minute longer. It’s a shame to see such talent in the cinematographer and special effects put into this disaster of a film. I learned one important tidbit from this film that the reason the Lone Ranger wears a mask is that he’s embarrassed to be scene after this thing. I knew I should have kept my appointment for root canal it would have been less painful. 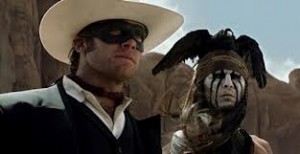