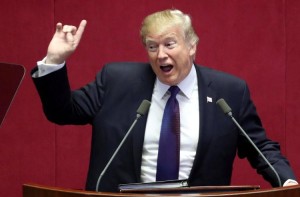 I have to admit sometimes President Trump, Trumps his praise too much but is it really just for him? I believe the President is raising his voice for all of us “deplorable s” who have never been given the credit we deserve. Whether it be the blue collar worker on the assembly line who actually goes to church on Sundays, the stay at home mom who protects her family with her 2nd amendment right or the executive on Wall Street that actually believes in the capitalist dream.   Maybe society has put us in “our place” because we haven’t followed their rules and the President helps us to realize they shouldn’t be the one’s who make them.  Yes the President is a bit boastful but when did we really have someone who shared that boast with us?  It’s time we stand up as well even if MSNBC , CNN and the rest of the elite try to push us down and the President has the pulpit for us to stand on as well.