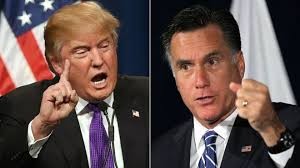 It is one of the biggest political mysterious of our time two enemies on the political battlefield Mitt Romney & Donald Trump willing to put away their hatchets and not in each other’s back…. (for now) against their most ardent supporters (Kellyanee Conway, Newt Gingrich & even dare I say Sean Hannity) who want them to continue the feud or at least keep the knife’s in hand.  Have they given up their beast or just found a new one? Here are just a few reasons (below) for this sudden change in plans.

(1) CHICKEN- Just as two cars going towards a head on collusion each is testing when the other will blink.

(2) REBEL-  Donald Trump continues to want to defy what other’s say he must do to be political successful even the other’s are his friends.

(4) EXCUSE-  At the last moment before that big dinner Donald can say he would have chose Romney but ….. and really pull the rug from under his feet falling on his …

(5) CRITICS INSIDE- It’s best to keep your enemies close and working for you whenever you can.

(6)  INSIDER- Donald Trump is more of an insider then his friends want to admit and wants to be liked by all even his most ardent critics. He feels his friends will continue to support him even if he shoots them in the foot (not literally although he has a pistol license).