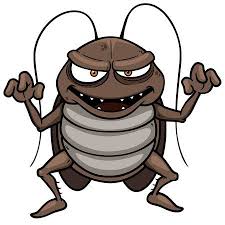 The “Killer Roach” will be an army of sterilized roaches that go out and eliminate their own.  Let’s face it if they would survive a Nuclear Bomb our sprays are not truly putting them  out of our misery, that is why the “Killer Roach” must step on. These roaches will be trained,bred and mutated to kill their own kind where-ever and whenever they see them.  Once they’ve completed there mission within days they will go back to their motel  and moved to another area rich with targets. Please note human hands filled with Roach blood will be needed for such transportation.  What these roaches do with their remains is none of our business as long as they make sure they are not walking our way.” Killer Roach” isn’t it time there were killers in the roach family.

FOOTNOTE-  I used a cartoon roach because they really are gross to look at and at this point this only lives in cartoon land.

My Story- Part I- Bud In Joseph’s Sandals- Section 7

I’m working my butt almost off when two men in black suits come into my business and urgently say they need to speak to me in private and what is said adds my name to the NY Times which is the main impetus to reveal this story to you..  These FBI officials tell me that there is an active death threat upon my life and that I should leave my residence as soon as possible.  The culprit who else but bad old Tom Steven’s.

I packed my bags as me, my wife and young child go into hiding at my sisters house. To tell you the truth I wasn’t in the panic mode maybe it was because of what I’d been through or maybe as evil as I thought Tom Steven’s could be I didn’t believe he was a killer. Not everyone in my family took this relaxed attitude many were in fear of my life.

Tom Steven’s went through the system as I did but was also under house arrest for a period of time after his bail was set.  The investigation determined that he was “entrapped”  into feeling he should commit this act and didn’t have the  serious intention for conviction.  I found out during the investigation that my former Vice President of the Club was involved in someway in these actions but even today I don’t know why he acted in such a way. Was it to seek revenge on my part without my knowledge, did he feel that Tom Steven’s was still a threat to the public or could it have been an alternate motive I guess I’ll never know?

Tom Stevens was exonerated of criminal activity in this incident and even though I didn’t see afterwards he still haunted my very being. Therapy helped me deal with these feeling and also allowed me to speak up about what had occurred.  In the past I would be embarrassed to tell this story even to my closest trusted friends and even family but today I’m as open as book about it.  I thank the NY Times for keeping this story in my spotlight and therefore making sure that I would tell the whole truth to the world.

In closing I ask that we all remember that those individuals without statue in life maybe the one’s most harmed by false accusations  justice is difficult for them to seek and therefore we should think twice even three times before passing judgement.

My Story- Part I- Bud In Joseph’s Sandals- Section 6

A story in the bible was about to change my life but not before I tried my own forms of justice.  Here I was totally and completely exonerated from the bogus allegations even before a grand jury was called and now was the time for my revenge to begin. First I went to the police station that had me arrested in the first place and asked that they bring charges against Tom Steven’s for these false accusations. They warned me not to get started and since my trust in the police was shaken I decided it was best not to ruffle their feathers.  I then sought justice through civil means but it’s hard but financial gains don’t replace pain and it’s hard to get monies from a dry sponge. In other words Tom Steven’s was talented enough to drag the civil case for as long as possible and claim financial hardship when it was finally decided against him.

The system of justice was failing me but my faith was rescuing me. I read the story of Joseph with a different depth that I never had before and it left a mark on me. I decided I would forgive Tom Steven’s as a person even if I couldn’t forgive his evil actions. The depth that he would go to for some silly files was pathetic and therefore he was a person who should in a sense be pitted instead of hated.  In other words it was sad to see that something so small could make a person feel that he act in such an outrageous way.  I was released of my anger and hate instead it was replaced with love for all those who stood by me during this most difficult part of my life .  A new sense of appreciation of some basic freedoms and simple pleasures that were ignored in the past became a center force in my life then and even today.  Although I wish that this would never happen to another I realized it helped me become a better more compassionate person.

Yet revenge would come but not by my hands or even thoughts.

My story- Part I- Bud in Joseph’s Sandals- Section 1

Murder seeped through my every heartbeat and burned my soul as I needed to seek justice, until a new light shine upon me.  The day began anew in one moment I was Mayor in the next I was behind bars all  because of a despicable lie meant to rip apart my very being. The reason that this hideous accusation was made is behind the scope of sanity yet in his twisted mind the idea of being thrown out of the nominating committee of a petty political club was enough to act. Machiavelli would have been proud.

Tom Stevens a name that still holds the scars of injustice in my heart was behind this action.  It was strange because he was the man that helped me escape my insecurities to the security of politics.  I was looking for my own identity and found a part of it in the re-election campaign of Ronald Reagan.  Political philosophy was something I could speak about for hours with the confidence of a surgeon seeking to find the end of a splinter. At a rally for Ronald Reagan,  Tom Steven’s was looking for another  naive young man  with ideals who was willing to jump in the ice cold world of politics even if he couldn’t swim. I grabbed at this life jacket. It would be years later that I found out this life jacket was full of holes and weights.

The connections I believed I had enabled me to move up the Republican ladder. I became President and Founder of Students for Reagan in SUNY Albany and started the Young Republican  Chapter at  SUNY Albany.  Politics already became a bit dirty as the College Republican’s of SUNY Albany were vindictive with a competitive YR chapter even though we both had a handful of members. I attended lavish Young Republican statewide events that Tom Steven’s was responsible for and bits of peculiarity about Mr. Stevens would occasionally slip out but I being loyal to the cause would discard them as just idle gossip.

The distraction from personality instead of cause left me with a bitter  taste that made me decide to drop out of the political world until Amy Carter pulled me back in….