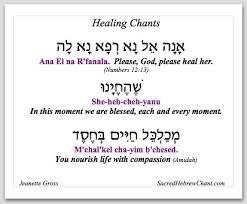 I begin my study with the Jewish belief that G-D/ Hash-m is the true healer so why would their need to be anything between an individuals prayers and healing? My first experience in studying Jewish Healing began when I studied the miracles that occurred through the prophets Elijah & Elisha. We see that these prophets were able to utilize special prayers to heal the sick and bring the dead back to life. Today there are movements in Judaism that actively participate in “Jewish Healing” whether it be those from “Jewish Science” or those in the Hasadic community such as “Mendel Morosow”. We will take a journey together to discover more about the ancient and present form of this healing. From the most traditional aspects of faith healing to the newest aspects that are occurring today. The reason is simple if my study can help just one person get the help they need or avoid a charlatan then this study will be worth every expense in time, effort and cost. I PLAN TO CONTINUE TO UPDATE THIS BLOG SEVERAL TIMES A WEEK BUT FEEL FREE TO ADD YOUR OWN INSIGHT.

Those who disagree with “Jewish Faith Healing will site Maimoides a great physician and Torah Scholar. Who says that it is prohibited to use spiritual incantations to cure physical wounds. Yet how does Maimoides explain the cures that Elijah & Elisha brought to those that were sick.

2/20/14- I’ve started my journey today by reading a book called “The Magic of Hebrew Chant” by Rabbi Sheffa Gold”. I choose this book because the idea of chanting as a form of Jewish practice seemed a bit unique to me. “Chanting” is repeating a phrase over and over again to bring you to a certain state. It appears to be a form of Yoga that allow the participant to get closer to their inner soul and according to Mrs. Gold get closer to Hash-m. The chanting is not only the key ingredient but the silence is also significant. Chanting might appear to be very “new age” but the idea of truly relaxing seems as old as the Sabbath. The Rabbi suggests groups perform this chanting ritual as the Chanter (leader) helps those who are in the group learn the meaning of the sacred phrase, breathing for chant, Intention, Sound, Melodic story, Tone and Rhythm, Visualization and the context from which the sacred phrase is taken among other aspects of this practice.

Rabbi Mendel Morosow describes how he acquired this healing power and who he has treated. He is a traditional rabbi that has utilized his abilities in an unconventional way. The rabbi first noticed his powers as a youth as he felt he could pick up the pains and moods of others but believed that these were his pains. He says he discovered his powers when visiting a homeopathic doctor for problems he was having, the doctor felt that the Rabbi had an usual power to sense the effect of the remedies. He began working with this doctor to deliver energy remedies to those that were sick. The rabbi claims that he can feel the root of their problem and how they might be helped. In his initial visit with a client he asks them to describe the pain they are feeling and then he can truly search for the cause that is bringing this to bear. If he was to use his power to try to discover the problem the Rabbi claims he would have less power to heal the individual. Cures have “been found” through his healing power or fixing a Mezzuzos or Tefillin. He claims to have helped thousands but has not kept a success rate. The Rabbi claims his referrals demonstrate the success he has brought to others. The Rabbi claims excess worry, fear, and negative thoughts are the cause of much sickness.

An interview with Rabbi Mendel Morosow who practices Jewish Healing

For the Breaking Bad addict