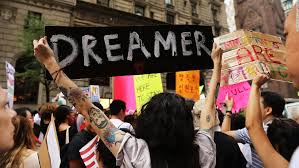 San Francisco Judge William Alsup needs to go back to law school because just because something “feels good” doesn’t make it the law.  The Executive Branch can’t decide to enforce the law on some and ignore the law for others, there is supposed to be equal justice in our country. Therefore if we believe the that those individuals who were brought to this country as children illegally should have the right to stay the people must vote for this to occur in legislative action that is signed by the President not made up by him/her. That’s just  law 101 and as a federal judge you decisions shouldn’t be based on how one feels but what is written even if you think the President is a meany. Yes, I’m writing in baby talk for this judge’s decision appear to be written by a 5th grade who failed his test.

I could have been a…. Rabbi.