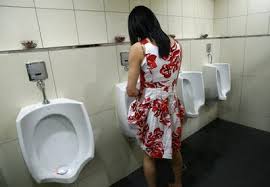 As artist such as Bruce Springsteen and companies such as Paypal cancel work with North Carolina because of their common sense legislation basically saying those with the same parts should use the same bathroom facilities the end of the public urinal awaits.  The pressure of the liberal political elite will cause the North Carolina legislators to “modify” such legislation and to avoid any problems public places will close the public urinals. Maybe it’s about time anyway because there is no reason any person should be in range of this view.   The cubicle will allow anyone to do their “work” without the chance of a glance in the wrong direction.  Men and woman will be able to use the same facility so the lines to the woman’s room will be much shorter with some sprinkles on the seat by those not so polite. This will probably spread to gyms as well where shower facilities will become more enclosed.  It’s ironic that those who’s whole mantra was  to “get out of the closet are going to being bringing us in a smaller closet the cubicle“.