Michael J. Fox is an inspiration

Michael J. Fox is an inspiration

by Bruce / Thursday, 26 September 2013 / Published in arts and entertainment, Blog 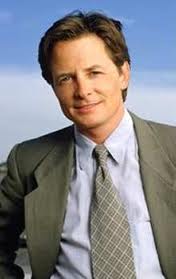 Michael J. Fox is an inspiration  not only for the brave way he has dealt with his illness but by the openness he brings to others who suffer (see the article below from Fox News). Many people who go through this type of battle go into hiding but Mr. Fox has opened the world  to the illness and even allowed us to laugh along the way. As they say laughter can be the best medicine. May G-D utilize this laughter to cure Michael J. Fox from the illness he suffers from.

With his new sitcom, “The Michael J. Fox Show,” actor Michael J. Fox has finally found a way to revive his acting career by making his Parkinson’s disease a part of the plot line.

But the 52-year-old revealed to Howard Stern that when he was first diagnosed with Parkinson’s, back in 1991, he struggled with the news and began “self-medicating.”

“My first reaction to it was to start drinking heavily,” he said. “I used to drink to party, but then I was drinking alone…Every day.”

Fox said therapy helped him deal with emotional affects of the diagnosis.

“It was about a year of a knife fight in a closet, where I just didn’t have my tools to deal with it,” he said. “But then after that I went to therapy, and it all started to get really clear to me.”

His marriage to wife Tracy Pollan improved after counseling, he said.

“My marriage got great,” he said. “And my career started to [take off again].”

“The Michael J. Fox Show” premieres on Thursday on NBC.

Why We Exist Now- A Bud Rebel Philosophy

2 Comments to “ Michael J. Fox is an inspiration”